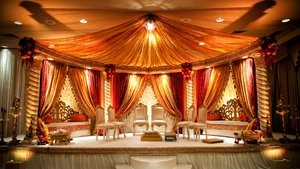 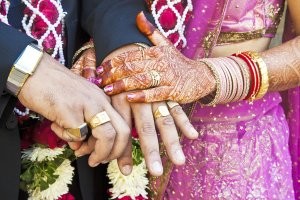 You cannot talk about an Indian wedding in New Zealand without talking about New Zealand’s biggest Indian wedding that took place earlier this year. This is the best and the biggest wedding ceremony New Zealand has ever witnessed. Sarah Palin and Donald Rumsfeld were some of the VIP guests that were invited. The wedding took place in Auckland and the couple was none other than Vikram Kumar (son of Chicago-based electronics tycoon, Shalabh Kumar) and Pooja Chitgopeker (who was Miss India Earth 2007). This couple is of Indian heritage was brought up in America and New Zealand respectively.

The ceremony took place over three days and it involved 10 events, with an attendance of over 500 guests, earning it the title of New Zealand’s biggest Indian wedding. In fact, the festivities were so exciting that they are set to appear in an Indian television series called “My big fat Indian wedding” with an estimated audience of over 80 million. There were a few setbacks, just like in any other ceremony, because they had planned to have cheetah cubs, lions and elephants but officials didn’t allow it. But despite the setback, this wedding ceremony was splendid. There are a few differences between the wedding procedures in New Zealand and India in terms of the traditions, ceremonies and religion.

This ceremony is done in accordance with some set guidelines. The initial step is worshipping the family god. This is followed by coloring the bride and the groom, which is done by their families. Coloring is done using turmeric, mustard oil and henna on grass twigs. This is the best part because everyone works extra hard to make sure that the bride and groom look stunning. At night, the henna tradition is practiced. To Indians, henna is the most vital makeup on a bride so her hands and legs are beautifully decorated with stunning patterns. On this very night, the family arranges a dance party called ratjaga. Everybody dances most of the night. This is also done at the groom’s residence.

On the main wedding day, 100 -10,000 guests enter the Mandapam (wedding hall) where the groom and the bride exchange garlands thrice as a symbol of unification. The couple is given special gifts at this juncture – milk and bananas – as the bride is presented (kanyadan) to the groom by her father. When this ceremony is done, the couple is brought to the Mandapam. As a crescendo of drum, trumpets, and showers of rice and flower petals float in the air, the groom ties a Thali (sacred thread) around the brides’ neck. The marriage ceremony is over once the couple walks around a ceremonial fire and the groom places toe rings on the bride’s toes.

In New Zealand an Indian has a right to choose a partner to marry. The parents don’t choose partners for their children, contrary to India where the marriages are arranged by the parents of the bride and the groom. Some parents even go to the extent of deciding who their children should marry when they are still very young.

Jewelry plays an important role in Indian weddings but brides in New Zealand tend to wear fewer and lighter ornaments in comparison to their counterparts in India. Buying jewelry for the bride among Indians is done by the bride, her parents, family and friends although brides in New Zealand have a say on what kind of jewelry (rings, bangles, necklaces) they want. This is contrary to brides from India who have their jewelry chosen by others.

In New Zealand an Indian wedding can either be held outside or indoors according to the preference of the couple whereas wedding ceremonies in India are held outside and everyone can attend. A wedding is everybody’s affair.

In New Zealand, when preparing an Indian wedding, both families take care of the expenses incurred during the wedding. This is in consideration of the harsh economy, so both families merge their resources to help make the big day successful. With Indian weddings performed in India, however, the brides’ family takes care of all the expenses incurred during the wedding.

Many New Zealand residents go to India to buy their jewelry because it requires customized items and it requires several trips to the gold smith. These weddings are not very different from weddings held in India, but New Zealand Indian weddings have a Westernized touch that makes them different yet special, making New Zealand a dream destination for every bride.