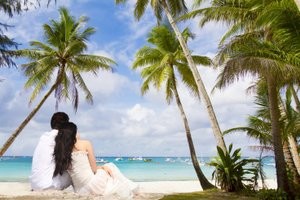 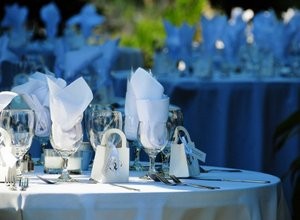 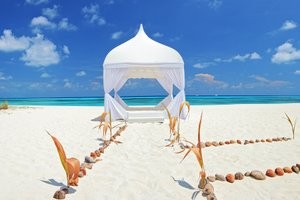 Weddings are very special events in people’s lives. Weddings are colorful in many cultures and the same goes for the Pacific Islands, Samoa and Tonga. These two Pacific Islands have various views on traditions and wedding practices.

Samoa, usually termed the “Heart of Polynesia”, is an island inhabited by friendly and hospitable people. Similar to Tonga, wedding ceremonies can be performed in churches, as in many cases, or in beautiful surroundings like beside a waterfall, on a beach or in the tropical rainforest. These sites retain the love, joy and a lot of memories for the couples. In addition, denominational weddings as well as civil rituals can take place. The nuptials can be performed in other stunning geographical settings and they are habitually based on tradition and superstition.

To start with, the brides’ gowns are made from tapa cloth that is obtained from the bark of a tree called the Mulberry. The wedding dress is then decorated with fresh wedding flowers and a pearl crown. There are two wedding gowns for the bride. The first gown is worn for the wedding service and the other to the reception. In her second dress, the bride performs a traditional Samoan dance when the guests arrive. This is followed by a special dinner. Meals are served by older children from both families. The older family members serve the important guests.

The wedding cake is very significant and is exclusively designed with multiple tiers that spread out across the table. The whole cake is not eaten during the reception and some of the tiers are offered to important guests. The gifts, as with any other wedding, follow next. In conclusion to the ceremony, a traditional dance follows which can go on all night. The ceremony often involves a large number of guests. This can include the high village chiefs, ministers and priests, members of the extended family and the families of the couple.

Weddings in Tonga have got a lot to do with traditions and superstitions. The wedding, as opposed to Western culture, takes place during a weekday, usually Tuesday. This is because Tongan culture views Saturday as an unlucky day. It is usually a major family event that lasts for three days and consists of many steps. The various traditional steps include:

In this case, a man asks a girl he likes for permission to befriend her. Once the girl accepts, a relationship is born.

After friendship, the man must then visit the girl’s parents to request permission for him to spend time with their daughter. When both come to an agreement, the couple can chat inside the girl’s house.

Asking for permission to marry.

The man again makes a formal proposal of marriage to the girl’s father. This is after the couple decides to get married. When the girl’s father accepts the proposal, both families start arranging the wedding.

These celebrations take place the night before the wedding day. On this event, special gifts like tapa and fine mats from the groom’s family are taken to the bride’s home. This shows that the groom’s family is content and happy with the upcoming marriage. This whole celebration involves traditional dances, a party and goods exchanged from both sides.

The couple is dressed in the best mats and shiny precious oils, as well as flower necklaces. The groom comes to the bride’s house and escorts her to the wedding venue. This is followed by a church ceremony to seal the marriage before God. After the wedding ceremony, dancing and feasting follows whereby a particular ceremony, called kava, is held to honor the couple.

On the first Sunday after the marriage, the couple attends church wearing their best ta’ovala (wedding garments). This is followed by a feast with both families, which marks the end of the celebrations.

There are many people involved in these weddings. They include family, important guests, priests, village head chiefs and friends. The important guests are there to mark the event as important. They receive various praises and honor from both families. The priests present during the ceremonies are there to unite the couple before God and they are a symbol of peace and blessings. The head chiefs, from both families’ villages, symbolize the unity of the two families.

Due to the various traditions in New Zealand weddings, there are many differences from other cultures, for instance Western culture. These weddings involve many people and invited guests. Some New Zealand weddings also involve a step by step approach to wedding traditions, which can make a wedding last for days, even a week. But most weddings last only one day.

How Are the Traditions Incorporated Into New Zealand Ceremonies?

In New Zealand, the wedding ceremonies are usually performed in church. The traditions incorporated in these weddings include a white-gowned bride and bridesmaids. When it comes to the groom, he wears a suit which may be dark with a white shirt. The same applies to his groomsmen. Other traditions mainly fall under superstition. This includes the belief that it is a sign of ill fortune if the groom lays his eyes on the bride before she walks down the aisle on the wedding day.

In addition, these weddings incorporate other traditional events, which follow after the wedding and sometimes before. These events include traditional dances which are performed, and the exchange of goods from both families.